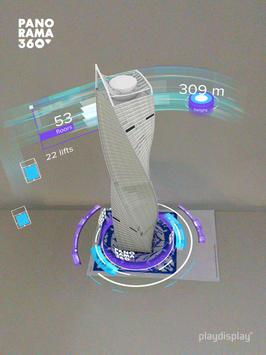 The app contains a unique information about the construction features and the main characteristics of each showcased tower, while unusual comparisons to international sights will definitely make you smile.

The app is kid and elderly friendly. It is adapted for three languages: Russian, English and Chinese, so international guests can use it as well as local guests. You just point the camera of your mobile device at a special image (AR marker), located on the podium at the observation deck PANORAMA360, and a digital 3D animated tower with a beautiful infographic shows up in front of you in augmented reality. Options to rotate the AR object and the use of built-in camera make the process even more exciting.

Upload the AR Moscow City app and visit one of the most innovative observation decks in the world PANORAMA360 as many surprises are waiting for you there.

Now everyone can enjoy magic and share it with friends and family!

To conclude AR Moscow City works on Android operating system and can be easily downloaded using the below download link according to Freeware license. AR Moscow City download file is only 49.4 MB  in size.
AR Moscow City was filed under the Education category and was reviewed in softlookup.com and receive 5/5 Score.
AR Moscow City has been tested by our team against viruses, spyware, adware, trojan, backdoors and was found to be 100% clean. We will recheck AR Moscow City when updated to assure that it remains clean.

Please review AR Moscow City application and submit your comments below. We will collect all comments in an effort to determine whether the AR Moscow City software is reliable, perform as expected and deliver the promised features and functionalities.