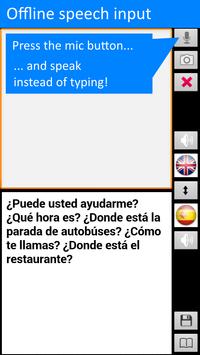 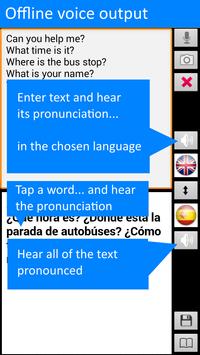 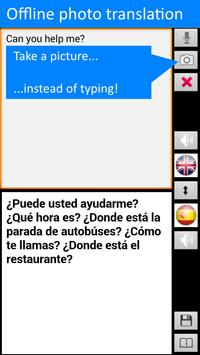 Free offline speech translator, dictionary and phrasebook app --translate offline voice, camera photos and text between English and Spanish without internet and when you are abroad! Save on data roaming charges when you travel!

TRANSLATE PHOTOS / PICTURES AND OCR
- use your device camera instead of typing;
- take a picture of printed text and translate it in seconds offline!
- available for English and Spanish;
- use this feature to easily convert photos of printed text into editable text in offline mode;

TRANSLATE WORDS / DICTIONARY
- dictionary between English and Spanish;
- recognizes any word form and identifies its features (number, person, gender, etc.)
- displays all the translations for a given word;
- displayed for single words;
- allows reading individual words by tapping the desired word in the translation;

HISTORY / PHRASEBOO
- you can create your own phrasebook by hitting the save button;
- all saved translations can be viewed for reference;

FREE VERSION
- you can try voice output and photo translation 100 times;
- you will be reminded to support us by getting one of our paid apps

() You have to run the app online once in order to download the data file;
() Voice/speech input is available on most devices running Android 4.0+.

If you encounter problems with the app, please contact our customer support!